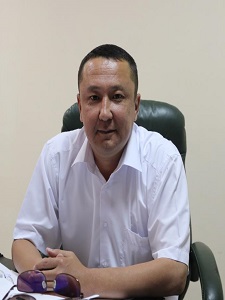 Berik Borashev started his career in 1992 as a gunner at the Guryev Mechanical Plant.
In different years, he worked as a master of PRUE, deputy head of the thermal networks section of Atyrau CHPP JSC, chief engineer, head of the AHCH department of the KGKP “Household management of the Akim of Atyrau region”.

Since June 2013, he has been working at the Apec Petrotechnic Higher Technical School LLP

During the period of work in the Apec Petrotechnic Higher Technical School LLP, he held the following positions: safety engineer, hotel manager, hostel manager, acting chief engineer, as well as Deputy Director for administrative and economic work and director.

Since August 06, 2014, he was appointed to the position of Deputy Director for Administrative and economic work.

He was awarded a letter of thanks, honorary diplomas of the Akim of the region, the Housing and Communal Services Construction Agency of Astana.