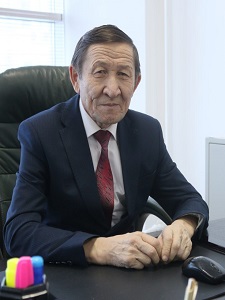 Murzagaliev Shakirzhan graduated from the West Kazakhstan Agricultural Institute in 1975.
After graduation, he began his career at the Guryev Agricultural College as a teacher of special disciplines, having worked in this position for two years Murzagaliev Sh.K., in 1977 he was drafted into the armed forces of the USSR for military service. After the end of his service in 1979, he continued to work at the Guryev Agricultural College as the head of the department, after which he was transferred to the deputy director for educational work.
From August 2002 to March 2016 Murzagaliev Sh.K. worked as a deputy head in the Atyrau Regional Department of Education, where he oversaw issues of technical and vocational education and training. Since March 2016, he has held the position of Deputy Director for Organizational and Educational Work at APEC Petrotechnic Higher Technical School LLP. Since October 2021, he has been holding the position of Deputy Director for educational and methodological work. Since December 2021, the duties of the director have been assigned.
Awards:
He was awarded the badge “Honorary Worker of Education of the Republic of Kazakhstan” and the medal named after Y. Altynsarin, jubilee medal “20 years of the Constitution of Kazakhstan”, 30 years of Independence of Kazakhstan.