Flag of the Republic of Kazakhstan 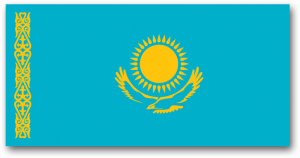 The flag is one of the main symbols of the state, symbolizing its sovereignty and identity. The term” flag” comes from the Dutch word “vlag” and refers to the concept of a fabric of a fixed size and color, usually depicted as a coat of arms or emblem, attached to a mast or cord. The flag has long fulfilled the task of uniting the people of the country and bringing it into line with a certain state structure.

The national flag of independent Kazakhstan was officially adopted in 1992. Its author is the famous artist shaken Niyazbekov.

The national flag of the Republic of Kazakhstan is a rectangular cloth of blue color with the image of the sun with Rays in the center and a soaring eagle under it. The flag has a national ornament in the form of a vertical stripe. The image of the sun, its rays, the Eagle and the National ornament are the color of gold. The ratio of the flag’s width to its length is 1: 2

In the tradition of heraldry, each color represents a certain concept. For example, the sky-blue color symbolizes such qualities as honesty, purity, reliability, and integrity in a person. In addition, the blue color has a deep symbolic meaning in Turkic culture. The ancient Turks worshipped the sky as a sign of God, and their blue flag symbolized loyalty to their ancestors. In the national flag of Kazakhstan, it symbolizes the clear sky, peace, kindness, and uniformity of color means the integrity of our country.

According to the principles of heraldry, the sun symbolizes wealth and abundance, life and strength. Therefore, the sun visor on the flag of our country is presented in the form of a golden ear, a symbol of prosperity and well – being. The image of the sun in the state attribute of Kazakhstan proves that the country values universal values and testifies to the creative power of the young state, open to all countries of the world for partnership and cooperation..

The image of the eagle (eagle) is one of the main heraldic attributes, which has been used on the coats of arms and flags of many peoples since ancient times. This image is usually perceived as a symbol of power, vigilance and nobility. Soaring under the sun, the eagle symbolizes the power of the state, its sovereignty and Independence, High goals and aspirations for a bright future. The image of the Eagle occupies a special place in the worldview of Eurasian nomads and is associated in their understanding with such concepts as freedom and loyalty, courage and courage, energy and purity of intentions. The image of the Golden Eagle reflects the aspiration of the young sovereign state to the heights of world civilization.

The most important element of the national flag is the vertical longitudinal national ornaments. Kazakh ornaments are a special type of artistic perception of the world that meets the aesthetic taste of the people. Patterns that represent a combination of different forms and lines are an expressive artistic tool that reveals the inner world of the people. The National ornament along the flagpole symbolically symbolizes the culture and traditions of the people of Kazakhstan.